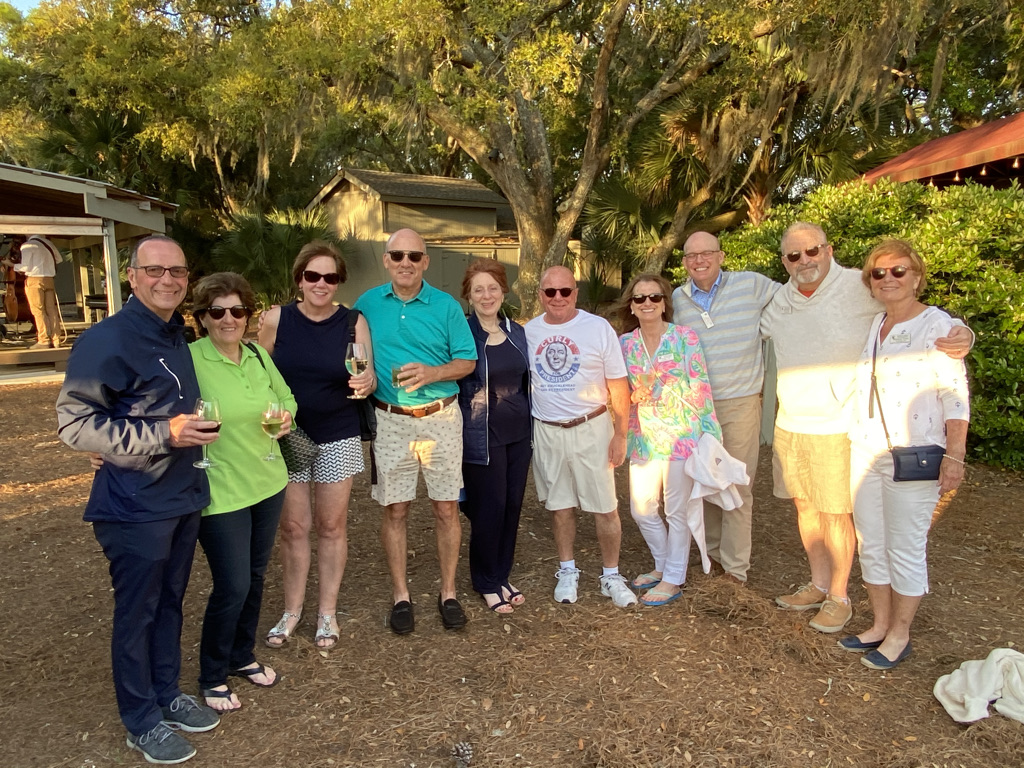 We endured the worst, but we have emerged stronger than ever!

On behalf of your Board and staff we would like to thank all of our ASGA members for your patience, support and understanding as we have navigated through a global pandemic. Despite the harrowing challenges, our Association remained steadfast and connected, and we are now excited to declare that WE ARE BACK!

In just the past month, we were able to host the 2021 ASGA Spring Championship at Kiawah Island for an enthusiastic group of ASGA members. The courses were in impeccable shape, the hospitality was almost humbling, and the camaraderie between members injected an energy like none we have seen before.

Please take a moment to scroll down to enjoy highlights from our trip to South Carolina. If you were not able to join us, we have much to look forward to over the coming months.

In July, we will bring a sold out group of members to to Vail, Colorado for our 2021 National Two Man Team Championship. Red Sky Golf Club will be our golf destination of choice, while the Sonnenalp Hotel staff is awaiting our arrival on July 18.

Not too far off on the horizon is our annual trek to Cape Cod where we will put our skills to test at Oyster Harbors Club, Hyannisport Club and Wianno Club for the 2021 Cape Cod Clambake. Scroll down for a complete list of upcoming ASGA events through the end of 2021.

ASGA members enjoying a night out during the 2021 ASGA Spring Championship held at Kiawah Island on April 11-14.

For the first time in over a year, a full field of members took part in our 2021 ASGA Spring Championship which was held at Kiawah Island Resort.

The elation at being together was matched only by the majestic setting that welcomed us from April 11 to April 14. Our members were spoiled with a breathtaking setting and a schedule of cocktails, dinners and celebration.

The highlight of the week, however, was the opportunity for our members to play Kiawah’s The Ocean Course, host of the 2021 PGA Championship at Kiawah. For months, the course had been groomed in preparation for this major championship, and we were able to play the exact same course that Phil Mickelson made history on last week.

Our experience began with our traditional Welcome Dinner at The Ocean Room at the Sanctuary Hotel. There we enjoyed breathtaking views of the Atlantic Ocean and exquisite cuisine.

From arrival to departure, we received an extraordinary welcome from our hosts at the Sanctuary Hotel. What we found was a five-star experience replete with Southern charm and luxurious accommodations. Our second night saw us travel to Mingo Point Oyster Roast and BBQ, which provided a genuine Lowcountry experience right on the banks of the Kiawah River. We could not get enough of the fresh oysters that were roasted over an open fire as well as the other BBQ specialties.

In the end, we were not sure what was more rewarding… the food, the hospitality or the company that we enjoyed!

Over the course of three days, members competed in the Spring Championship. This year’s event featured a men’s gross, men’s net, super senior gross, and super senior net division over three rounds, while our ladies took part in a two-round individual stableford gross and net championship.

The first round was contested at Osprey Point Golf Course, a championship-level course with a world-class layout that was completely renovated in 2014 under the direction of course architect Tom Fazio. Each hole delivered a new challenge including the four extremely distinctive par-5s and ten outstanding par-4s ranging in length from 340 to 461 yards. The layout proved to be a perfect opening round site.

Our second round for the took us to The Ocean Course, which was in pristine and PGA Tour-caliber condition. Our members received a treat by playing a course that had been groomed and prepped for the PGA Championship that would be held just weeks following our departure.

Our final round was played at the Turtle Point Golf Course, which had – less than 10 years earlier – undergone a comprehensive renovation led by Jack Nicklaus and members of his architectural team. Our members quickly came to understand what Nicklaus’ meant when he said that he designs courses to, “make the player use his mind ahead of his muscles—to control his emotions sufficiently to really think through his options before drawing a club from the bag.”

In the Men’s Gross division, Mike Moonan (Pennington, NJ) captured the top prize with a stellar three-round score of 227. After trailing by one stroke following round one, Mike posted a score of 71 at The Ocean Course to earn a lead that he would not relinquish. Mike Conroy (Oxford, CT) and Bob McTammany (Stuart, FL) finished second and third, respectively.

In the Men’s Net division, Blair Foley (Naples, FL) claimed an impressive victory over second-place finisher Ken Spiegel (Delray Beach, FL). Foley’s victory was fueled by a first-round score of 68 which was backed up by scores of 74 and 72. Peter Francini (Milford, CT) came in third, while Gary Pirri (Dedham, MA) and Hal Parrish (Manassas, VA) finished tied for fourth.

Mike DeBaggis (Westbrook, CT) was simply outstanding in the Super Senior Gross Division. Mike began his title pursuit with a 78 posted at Osprey Point Golf Course. He followed that up with two scores in the 80s to capture the top prize. Reggie Alford (Lakeland, FL) finished second overall with a score of 253.

The Super Senior Net Division was won by Gary Rathburn (Tulsa, OK) with a score of 225. Rathburn used a finishing-round score of 71 to secure his victory. Ken Auerbach (Bonita Springs, FL) came in second overall in that divisional race.

The Ladies’ division featured two rounds of golf played at The Ocean Course and Turtle Point Golf Course. Valinda West (Tulsa, OK) was the only divisional competitor to post a sub 90 round en route to the gross division title. Valinda posted 83 and 93 for a winning score of 177. Laura Murphy (Naples, FL) turned in a second-place performance, while Mary Lou Baiocco (Larchmond, NY) finished third overall.

While many enjoyed golf over the three days, our non-golfing members and spouses spent time enjoying the history and sites of the area.

On Monday of our stay, we enjoyed a tour through Colonial, Antebellum and Victorian Charleston, including a special visit to the Heyward Washington House.  Built in 1772, this Georgian-style double house was the town home of Thomas Heyward, Jr., one of four South Carolina signers of the Declaration of Independence.

Lunch at Magnolia’s Restaurant was followed by shopping in the Old City Market, which has – since the 1700s, been Savannah’s central marketplace for people to trade, shop for groceries and mingle with other community members.

The very next day, our non-golfing members traveled to Middleton Place which sits on 110 vibrant acres including 65 acres of America’s oldest landscaped gardens – floral allées, terraced lawns, a pair of ornamental lakes shaped like butterfly wings – as well as a House Museum, Eliza’s House, working Stableyards with artisans and heritage breed animals.

Following a Lowcountry lunch in the Middleton restaurant, we visited the stable yard to experience life on a “working” plantation. It was quite the day, so we were excited to enjoy an evening of leisure back at The Sanctuary Hotel.

We are fortunate to be able to relive our adventures at Kiawah Island Resort through amazing photos. Click the image below to see photos from our trip.

We had the incredible surprise of having Gary Player join us for the opening reception and dinner at the Flagler…
Devan
News
October 25, 2020

In our continuing effort to provide Members with different opportunities to come together until the time comes when we can…
Devan
News
October 21, 2020